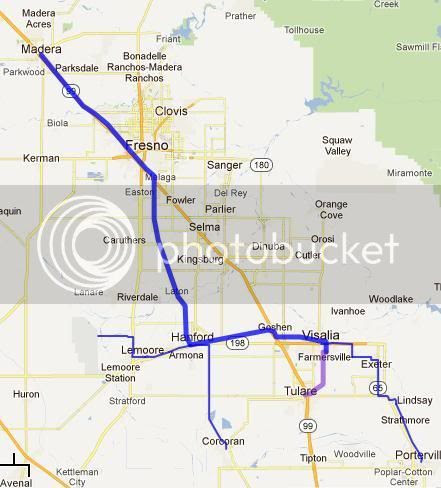 Kings County officials have been opposed all proposed routes:

Board members said no high-speed rail route through Kings County would be acceptable while denouncing the Authority and its Fresno-to-Bakersfield environmental impact report. “I think we should come out and oppose high-speed rail in Kings County, no matter what alignment they have,” said Supervisor Tony Barba during a discussion of the county’s official response to the EIR, which is due Thursday. He was applauded by a large crowd that nearly filled the Board of Supervisors’ chambers at the Kings County Government Center.

And then they opposed getting started on California HSR:

HANFORD — Kings County supervisors on Tuesday will likely ask three key legislators to delay high-speed rail funding until the project resolves local conflicts. ... The Legislature is expected to vote in June whether to spend $2.7 billion in state bond money on the project, which has created major controversy in the San Joaquin Valley and stoked opposition from several cities and counties who believe it should be scrapped. Denying the funding would stop the Authority from starting construction in Fresno later this year or in early 2013.

... But Authority officials have recently entered into discussions with Kings County to see if Amtrak service through Hanford and Corcoran can be preserved, said Larry Spikes, Kings County administrative officer. Downtown stations are considered critical to cities’ local economy. Authority Board Chairman Dan Richard couldn’t be reached for comment. “Taking Amtrak right out of the heart of Hanford and Corcoran is just not a good idea,” Spikes said.

So, don't want the HSR Station in town, don't want the HSR to go outside of town, and wants Amtrak to be continued to Hanford and Corcoran at slow speed when the San Joaquin after the high speed route between Merced and Bakersfield becomes available. What I am looking in this week's Sunday Train is a different way to go about this that provides a mix of local and intercity transport benefits to the major county centers: the Fresno Regional Rail Corridor.
__________________________

Read about the system and join the conversation at: