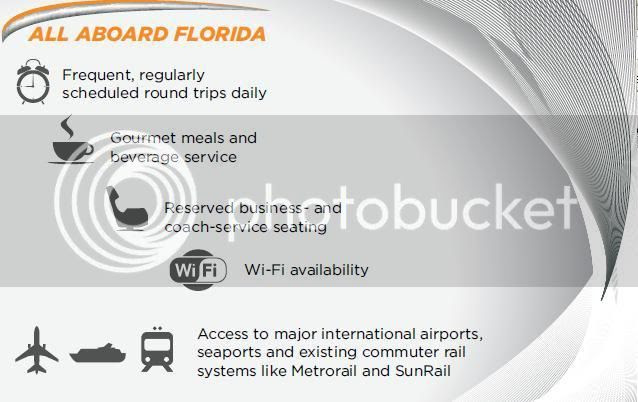 I saw this story a couple of weeks ago, but between the happenings in California and some unanswered questions I had, I haven't mentioned it yet. Florida East Coast Industries plans Miami-Orlando passenger service by 2014:

Passenger train service between Miami and Orlando could begin as early as 2014 under a plan announced Thursday by Florida East Coast Industries.

The new "All Aboard Florida" service, which would be privately owned and operated, would offer frequent, regularly scheduled daily trains geared to business travelers and tourists. The Miami-Orlando trip by rail would take three hours, about the same time it takes by car via Florida's Turnpike.

There would be four stops: Miami, Fort Lauderdale, West Palm Beach and Orlando, each with connections to airports, seaports and existing rail systems such as Tri-Rail and Metrorail. The trains would run on existing FEC tracks that stretch along the east coast from Miami to Cocoa. Forty miles of new track would link Cocoa to Orlando.

Well, waddya know ~ a Passenger Train that Scott Walker can't kill. More about the Miami/Orlando Train, below the fold.
_______________________
Read the Sunday Train and join the discussion at
The Stars Hollow Gazette
Daily Kos