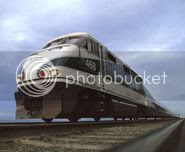 This is more or less the three year anniversary of the first Sunday Train ~ a bit less than more, since this is the 12th of August 2012 and I think that the first Sunday Train was 16th of August, 2009. It emerged from a variety of blogging I had been doing over the previous couple of years, with a notion that if I set down a target of blogging on Sunday, it would make it easier for people to track the Sunday Train down. It was originally posted at my midnight-populist blogspot, Burning the Midnight Oil, crossposted to Agent Orange, My Left Wing, Progressive Blue and Docudharma, but I was never really enthusiastic about building up my own blog, and nor about the constraints of blogspot, so over time I settled on writing the Sunday Train at a community blog, cross-posting it to other community blogs, and posting the summary to Burning the Midnight Oil, with cross-links to the blogs containing that week's full post.

The crosspost list also varied from time to time: of those original community blogs, I rarely visit My Left Wing or Docudharma much anymore, and the best of Progressive Blue has been folded into the broader coalition at Voices on the Square, which since its launch last month has been the new home base for Sunday Train. The Sunday Train still rolls into Agent Orange (aka "daily kos"), and has for some time also stopped at Hillbilly Report and the Stars Hollow Gazette, and occasionally at the European Tribune.

In celebration of the three year anniversary, more or less, I am reprinting the diary from the 16th August, 2009, "zOMG, these aint REAL HSR trains!"

posted at Voices on the Square

"Oh, sure, more than 1/5 of journeys to work in Eindhoven, The Hague, Amsterdam and Utrecht in the Netherlands are by bike, but they are flat. It would never work here, its hilly." Given that Copenhagen has one of the highest European cycling mode shares in trips to work, winter is obviously not the obstacle that it is sometimes made out to be ~ ah, but hills. They are an insuperable obstacle.

Back in April, 2010, comparing Portland and Seattle, Jarret Walker asked, Should we plan transit for "bikeability"? This was following a project by Adam Parast comparing the cycling potential of Portland and Seattle, including potential bikeability with improved infrastructure. And the geography of Portland, with most development and activity on the flat or gently sloping floor of a valley, is substantially different from the geography of Seattle, built on "seven hills", with water obstacles tossed in for good measure.

Posted At: Voices on the Square

Crossposted to: The Stars Hollow Gazette

Posted by BruceMcF at 2:03 PM No comments: