Sunday Train essays for the Sundays of August:

Sunday Train: Traveling to Our Death and The Fatal Santiago Train Derailment 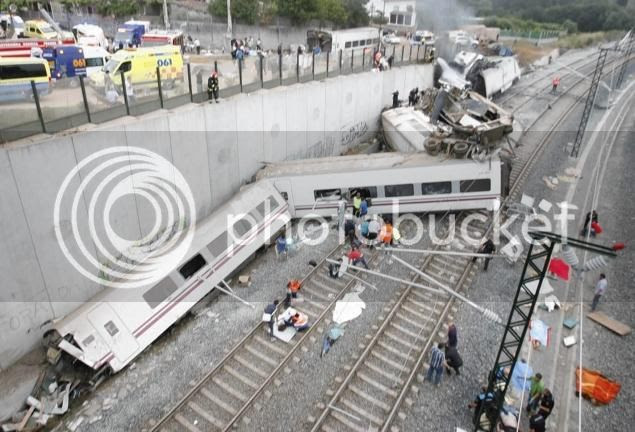 At the time that I start writing, the death toll from the train wreck that took place in Santiago de Compostela in Spain has risen to 79. According toan account shortly after the crash (sp):

Alternating AVE segments with segments of conventional track or of lower specifications occurs at other points of the line. The Alvia train between Madrid and Ferrol, the fastest going through Santigo, travels on different tracks. Between Madrid and Olmedo (Valladolid) it takes advantage of the AVE track. Then, between Olmedo and Ourense it returns to a conventional track, waiting for the completion of the AVE works already underway. Finally, between Ourense and Ferrol it again joins the AVE line, which at the entrance to Santiago goes alongside the old track.
At that moment, the train must brake and when it reaches the tight bend where the accident took place it must leave it speed at barely 80km/h. The velocity drop at that point is very steep: form 200 km/h to 80 in a short time span.
The causes of the excessive speed are still not known. The line where the accident occurred is still not within the ERTMS (European Rail Traffic Management System), a rail traffic mnagement system preventing a train from exceeding the established speed limit or disobey stop signals, very similar to the automatic alert systems already installed in many European countries. This system is the one deployed, for instance, on the Madrid-Barcelona AVE line in october 2011. (translation by Migeru at the European Tribune)

The statement "the cause of the excessive speed are still not know" is referring to the proximate cause, since the ultimate cause is stated directly after: the line is not within the version of Positive Train Control signal system used in Europe, the ERTMS.
30 July: Also see this UPDATE at Voices on the Square: The Santiago Train Derailment Could Have Been Prevented with a Euro 6,000 beacon
____________________________
You can read the complete Sunday Train and participate in discussion at:


You may also discuss with me on Twitter @BruceMcF

Sunday Train: Why Does Congressman Mica Lie About Amtrak?


Sunday Train: Why Does Congressman Mica Lie About Amtrak?

Congressman John Mica, Republican from the Florida 7th district and member (former chair) of the House Committee on Transportation and Infrastructure, has been on the attack against Amtrak again. During the testimony to the committee by John Robert Smith, head of Transportation for America and Reconnecting America, and former Republican mayor of Meridian, Mississippi, faced aggressive questioning by Congressman Mica promoting his desired defunding of Amtrak:

... But Mica spared his real invective for the next part, where he let Smith know he’s seen “your little memo that you sent to my mayor.” Something about the belittling, eyes-in-the-back-of-my-head tone there was just chilling, like he’s saying he found the love notes Smith was writing to his wife. “House of Representatives slash Amtrak funding, putting the future of the national system in jeopardy!” Mica read the line in a high-pitched tone, mocking the hysteria Smith was clearly exhibiting when calling Winter Park Mayor Ken Bradley’s attention to the House cuts.

Does Smith really think a cut of $1.4 billion to $950 million is such a big deal? Well, yeah, actually. “Don’t you think the United States is under threat when you’re in debt up to your eyeballs, when you’re borrowing 40 cents on the dollar to underwrite your service?” Mica exploded. “You’re aware that every ticket on Amtrak last year was underwritten more than $40 per passenger ticket? You’re aware of that?”...

Mica railed against Amtrak’s “Soviet-style operations” and the money losses on food service aboard the trains and asked Smith if he should “go back and tell that mother [of the soldier not getting hot breakfasts], ‘You know, we need to put this money into Amtrak; we can’t take any cuts out of Amtrak.’”
To which John Robert Smith firmly replied: “That’s a false choice, Congressman.”

Indeed, you don't have to take the word of DC Streetsblog about the exchange, as it has been put up on youtube:

Posted at Voices on the Square, crossposted at the Stars Hollow Gazette, HillbillyReport.org, and Daily Kos. Go to one of these community blogs to see the full post and participate in the discussion there or @BruceMcF on twitter.
Posted by BruceMcF at 8:05 PM 5 comments:

Note: This post is a central junction ~ the entire post is contained in the locations linked to below. All that is reposted here is the above the fold "teaser". Comment at the community blogs posted below or directly on twitter to @BruceMcF

This is the year that the funding authorization for the Federal Rail Authority expires, and the Obama administration is answering with a bold new plan to invest in this critical piece of any long term sustainable transport system, as described earlier this month at the Transport Polititic:

Total funding for rail activity, both for operating funds and capital projects, would increase from about $1.8 billion in 2013 to more than $6.5 billion in fiscal year 2014. Over the course of five years, about $40 billion would be devoted to rail improvement across the country, a massive expansion paid for with funds “saved” from ending military operations overseas. This would be headlined by a $5 billion “jump-start” stimulus for rail, part of a $50 billion infrastructure package the Administration is hoping Congress will pay attention to.

Rolling out of Voices at the Square, also serving The Stars Hollow Gazette and The HillbillyRreport.net.
Posted by BruceMcF at 8:15 PM 3 comments:

The Sunday Train is now up at Voice on the Square:


Citi Bike officially launched to annual members on Monday, May 27. As of 5 p.m., members had made more than 6,000 bike trips, and traveled over 13,000 miles – greater than half the Earth’s circumference! Visit Citi Bike’s blog for more stats, facts and tips. Membership opens to daily and weekly users on June 2.

Well, it opened to people taking out an annual membership on May 27, but I don't live anywhere near New York, so if I get to use it, it will be as a "daily or weekly" user.

The complete Sunday Train can also be found at The Stars Hollow Gazette and The HillbillyReport.org. Feel free to comment at any of those sites, or on twitter @BruceMcF .