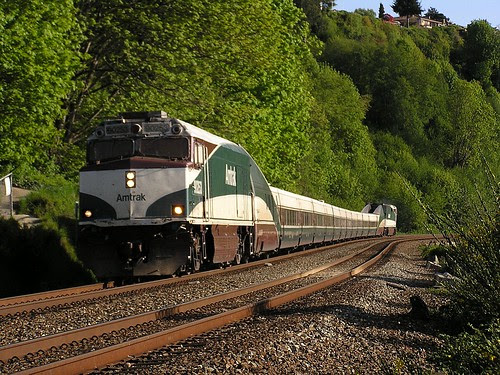 I've seen this before ... indeed, it was mentioned recently in some discussion threads of Libertarians Against Choice ... the effort to play divide and conquer by arguing "if it doesn't go 220mph, it isn't worth doing".

John Hilkevitch of the Chicago Tribune asked last money Are 110mph trains on the right track? (secondary link - I'm having trouble with the primary), establishing at the outset the false frame that 110mph and 220mph trains are two different "tracks" and we have to choose between them.

This is, of course, uninformed nonsense. Indeed, the first generation of bullet trains were 125mph trains, which is the second tier of the three-tier Department of Transport system.

Where does this meme come from? Some of it is a natural reaction. "110mph? How fast do those European trains go? Why can't we go that fast?" But some of it is clearly cultivated, since I see it in the writings of anti-HSR propagandists like O'Toole, where we find in a mix of facts, half-truths, red herrings and outright lies the following argument:

The FRA is not proposing to build 200-mph bullet trains
throughout the U.S. Instead, in most places it is proposing to
upgrade existing freight lines to allow passenger trains to run as
fast as 110 mph – which means average speeds of only 55-75
mph. This would actually be slower than driving for anyone
whose origin and destination are not both right next to a train
station.

The first distortion here is the misleading pretense that the FRA is proposing the corridors. This is simply not the way the process works. Instead, a state or a group of states proceeds with preliminary planning, including identifying potential ridership and identifying potential alignments. As part of the process of getting ready to apply for Federal funding, any alignment that is not yet part of an existing Dept. of Transport HSR corridor needs to apply to be added to a corridor (or designated as a new corridor - under the original Clinton-era HSR legislation, Congress has one more corridor designation available to hand out).

The second distortion is the tacit suggestion that the only competitive advantage that rail can have over cars in transport markets is faster speed ... because after all, nobody ever takes passenger trains that are slower than driving.

Except, of course, they do ... experience in several states, including HSR funding applicant California and Illinois, is that providing more frequent and more reliable conventional rail results in increased patronage. Now, if the people taking the train before were those with no choice ... some of the new riders are those who could have driven, but decided to ride instead.

The third distortion is a 50:50 mix of outright lie and red herring. As described in techincal detail in this report from Sweden (pdf), when a track is shared with slower speed trains, and the track is banked for the slower speed trains - and this is essential when the slower trains include heavy freight, with their axle loads of up to 33 short tons - that means that curves impose a speed limit on trains, even if trains have a much higher top speed.

In fact, four factors interact: distance between stations, top speed, power of the locomotive, and the banking possible around curves. The closer stations are together, the more important a powerful locomotive becomes, because so much time is spent pulling out of stations ... but once stations are over 4 miles to 12 miles apart (depending on the tightness of the curve), the ability to tilt is more important.

So if you run a conventional train with a locomotive that can reach 110mph then it is perfectly reasonably to say that trip speed will be 55mph-75mph. However, with stations 30 miles apart or more, as in the Ohio Hub and Midwest Hub plans, and if tilt-train technology is used, the fastest trip speeds rise to the range of 85mph. If the line is then electrified, which increases acceleration and deceleration, that top speed can exceed 90mph.

Indeed, O'Toole is either confused or bullshitting when he says (p. 9):

It is unlikely that moderate-speed train operations will save any energy at all. Such trains will mostly be Diesel-powered, and increasing speeds from 79 to 110 mph will significantly increase the energy consumption and greenhouse gas emissions of those trains. Saving energy requires that trains accelerate slowly and coast into stations rather than brake heavily, but such practices reduce the time savings offered by higher top speeds.

... since the primary factor determining the energy efficiency of intercity rail is the load factor ... the percentage of time that the average seat is occupied. Even Diesel 110mph tilt-trains have between fuel efficiency per seat-mile than cars do, so as long as their load factor is higher than that of cars, they are saving energy.

And how do you get load factors up? Well, consider the Triple-C corridor, from Cleveland to Columbus to Cincinnati. At 79mph, that is two main transport markets - Cleveland/Columbus and Columbus/Cincinnati. At well over 3 hours, Cleveland/Cincinnati, the end to end trips fall outside of the day trip market, which is a strategic threshold for attracting riders from a wide range of market niches. The typical seat will either by occupied twice, or will be occupied for one leg but not the other.

At 110mph, Cleveland/Cincinnati comes into range for the day trip market. That increases ridership, and in particular increases the seats that are sold to be occupied for 100% of the route. And it also increases the frequency of rail services that can be offered, which makes it easier to match up to periods of stronger transport demand. And, of course, more frequent services means it is easier to use shift price sensitive passengers onto services with less demand, making room on the high demand services for the departure/arrival sensitive passengers ...

... all of which translates into higher load factors.

O'Toole is, of course, not interested in actually analyzing energy efficiency ... his interest is coming up with arguments against the HSR policy. But the point of interest for this post is the way that he works to divide Emerging HSR from Express HSR, which is presented as better than Emerging HSR (albeit "probably not good enough"):

True high-speed trains save energy by using lighter equipment, but the energy cost of higher speeds party offsets the savings from hauling less weight. Any remaining operational savings are not likely to be sufficient to recover the huge amounts of energy consumed and greenhouse gases released during construction of new rail lines.72

(Also note here the talking point on CO2 construction parroted by Freakonomist Ed Morris, despite the fact that he was citing a source that debunked the claim.)


Emerging HSR and Express HSR Are The Same Track

So, the Libertarian anti-rail propagandists are out there spreading the talking point that "and most of these are 'real' HSR anyway", aided and abetted by Express HSR enthusiasts who have fallen into the trap of talking down one option as a means to boost the chances of another one.

But it just does not hold water. Well chosen 110mph routes will be able to generate operating surpluses, so once they are up and running, they will not be fighting against other transport for public funds. Indeed, they will be able to support revenue bonds for their own capital improvements ... including, importantly, electrification.

Indeed, just as in France, once the 110mph corridors have been electrified, then a single 220mph corridor can host multiple services that continue beyond the end of the 220mph corridor to various points on the main inter-urban network. While they would not operate at the same speed as a train designed for those routes, they will benefit from the increased capacity and untangling of freight trains and passenger trains that has been undertaken for the Emerging HSR services.

Also, the process of establishing the 110mph Emerging HSR corridors will include untangling bottlenecks that currently plague express intercity services running through our major metropolitan areas. It is not critical for the Express HSR service to run through the densely populated core of major metropolitan areas at full speed ... but it is critical to have unimpeded access. Indeed, one of the reasons that the French HSR corridors were so financially successful is that they were able to leverage the existing infrastructure to allow Express Intercity services into major metropolitan areas, so 220mph corridor construction could be focused in the countryside where it was much less expensive.

Finally, and perhaps most importantly, a program focusing on Express HSR alone faces extreme political vulnerability. Competing against heavily subsidized interstate road and air infrastructure, Express HSR corridors will required substantial up-front capital subsidies. Relying on development of new rights of way, completely grade separated from the existing road and rail networks, these systems can take a decade or more to build. And under current conditions, relatively few states would be likely to participate in the first round of corridors ... a special concern given that the US Senate is normally where progressive policies go to die.

However, when all the types of rail services that offer substantial improvements on what is presently available are collected together into a single package, the result is much more politically robust. Over 70% of the states can make a quite serious and reasonable case for inclusion in some form of "Higher Speed Rail" corridor, whether Emerging HSR, Regional HSR or Express HSR ... and, indeed, over 60% have already done so, at least to the point of gaining corridor designation for their starter lines.

And unlike Express HSR, the Emerging HSR corridors can deliver results must more quickly, with many of the ones that have already completed their environmental impact statements able to go from funding to running services in three to four years time. And the ongoing launching of services in various parts of the country will naturally lead to cries of, "why not us?" ... which lays the foundation for maintaining the ongoing funding required to construct the Express HSR corridors.


What is the Strategic Point

And that would seem to be the strategic point behind that particular Libertarian talking points - divide and conquer. Whenever "the other side" is stronger in coalition than separately, it should be expected that part of the attack is an effort to wedge the coalition apart.

And the particular appeal of this particular wedge strategy is the fact that you can get enthusiastic Express HSR to do some of your dirty work for you. Despite that fact that a "standalone Express HSR" policy will not be able to deliver as much money for Express HSR as the coalition strategy will do, there will always be those who fall into the trap of seeing the funding going to Emerging HSR and Regional HSR and think, "why, they shouldn't get that money, we should".

And so all that the Libertarians propaganda mills need to do for this particular talking point to take a life of its own is to encourage the politically naive among Express HSR supporters in that misguided jealousy.

Wow seriously, those would be fast.