The 110mph Triple-C passenger train: Ohio, Now Is The Time

This is information from the Midwest High Speed Rail Blog, Ohio Proposed Budget Includes Developing Passenger Rail Between 4-5 Cities (who themselves give a h/t to Transportation for America):
" 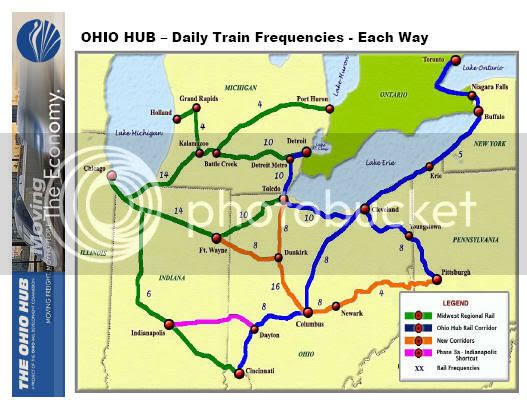 From the DispatchPolitics article, the static:

The rail element of the budget did not sit as well with some state representatives. Until Amtrak completes a study of potential ridership and revenue this summer, state officials don't know how much the train system would cost.

Of course, in the Financial Viability chapter of the Ohio Rail Development Commission planning for the Ohio Hub, the Triple-C corridor is the strongest corridor, projected to be able to gain revenues 180% of operating costs as the core of the Ohio Hub and MidWest Rapid Rail System is brought online ... so waiting for the Amtrak ridership analysis to confirm that its a strong corridor seems to be a delaying tactic, precisely so the politicians can say things like:

... assuming that their constituents are ignorant about the volume of numbers that have already been produced.

The most important point, here, is that this is a seed project. The Triple-C is such a good corridor for 110mph Rapid Rail that it should quickly achieved an operating surplus. Then the operating surplus can be used to fund state bonds to provide a state match to Federal funding down the track, to continue building out the entire system.

And of course, because of the geography of the US and the history of Chicago as a rail hub, the complete Ohio Hub project fills in the missing link between the Empire Corridor in New York and Keystone Corridor in Pennsylvania and the Mid-Western Rapid Rail System centered on Chicago and extending into Indiana, Michigan and Ohio to its east; Wisconsin, Minnesota, Iowa, Missouri and Kansas to its west; and the Amtrak corridor to Memphis and NOLA to its south.

If the well-practice bullshit and delaying tactics of HSR denialists is allowed to prevail, its not just an Ohio issue ... it will slow the growth of Rapid Rail connections in an areas stretching from New York State to Kansas.