We should recapitalize the banks with printed money.

Well, no, we shouldn't ... at least, that is not the main route to a solution.
Printing money solves a liquidity crisis, which is a shortage of liquid assets by solvent firm.

Printing money does not solve a solvency crisis, because money from the Fed does not generate income for commercial banks. The fundamental problem of the commercial banking system is that that they pursued higher income by pretending that high risk, high yield assets were low risk, high yield assets, and so the contingency reserves that they should have been building up based on the massive systemic risks in their portfolios were instead distributed as if it was profit income.

What we need are commercial banks that are both solvent and liquid and that not only can but will lend to business and consumers once the recession bottoms out so that it is possible for injections in addition to government spending to be pumped into GDP.

And we need to do it on the basis of stable leverages and growing incomes … growing leverage on the back of stagnant income has been tried and has been found wanting.

For reference, see further discussion by Jerome a Paris in contemplating the following graph, and what it means about the US economy: 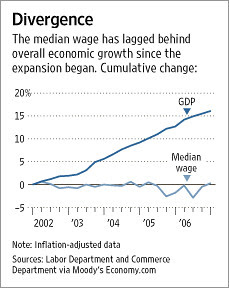