A Train Station Grows at Transbay ... Hopefully not a Bonsai (pt. 1) 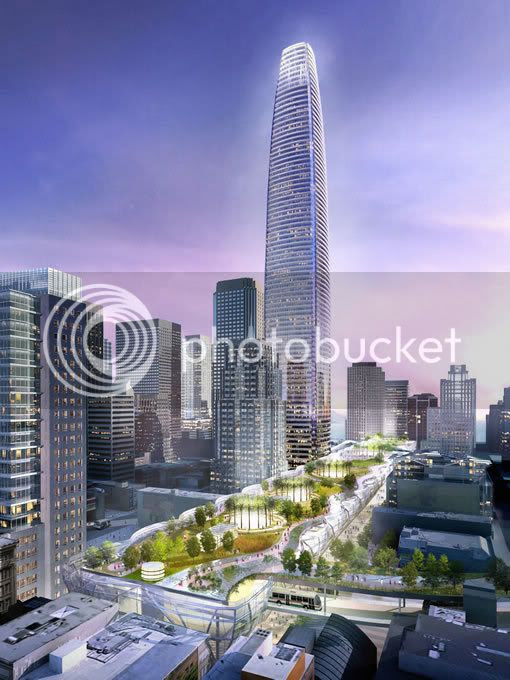 Crossposted at Progressive Blue, Docudharma, The European Tribune, and soon at Agent Orange.

I was able to get an interesting look into the proposed future of Intercity Travel in the Bay at the Transbay Terminal (TBT) in San Francisco.

Note that I am not trying to give "objective reporting" on this issue but rather to give vent to my reaction to watching the hearing online ... see The Troubling Discord Between Transbay and High Speed Rail Authorities for a less hot under the collar reaction.

One piece of information is that in California, when one public authority has the funding for sufficient staff and another doesn't, and it comes to a fight, it is considered fair game for the staffed up authority to toss up spin and red herrings and biased analyses, confident that the other authority does not have the capacity to answer promptly.

Late on in the piece is the technical guy from the Transbay Terminal (TBT) project putting in all sorts arguments against changing the design of the TBT "train box", without concern or regard for whether the arguments would be considered fair or impartial by a disinterested third party. He compared:


How many HSR services should be allowed for?

On the other hand, the California High Speed Rail Authority (CAHSRA) seems to be making claims that are difficult to support. They seem to have asked for an ability to support 12 trains per hour (tph), with 40 minute platform dwell times, claiming that they need 9 to 10 platform tracks.

More fundamentally, though, where are 12 trains per hour coming from? That is a technical requirement for through stations, because the HSR line is designed to permit trains to pass at five minute intervals, and along the line, you cannot allow one service to block the next in line.

For the terminal station, the question is the number of services that might start or end at the station. For the California HSR system:


So this is 4 trains per hour ... 1 train per hour on four distinct services ... without even considering a Fresno special, or a spur at Mojave for Las Vegas.

Indeed, as blogger DoDo on the European Tribune notes, the service schedule that the HSR ridership modeling is based upon (pdf) implies up to 8 trains per hour at the TBT.

Given the massive cost of building more capacity after the original foundation has been laid, the capability for eight (8) HSR trains per hour seems to be a perfectly reasonable expectation for the primary northern terminus for the system.


Following the trail of red herring

Now, when someone deploys deceptive comparisons and unbalanced comparisons, I have a reflex reaction ... a pile of red herring is normally used to cover something up.

And that something seems to be is a design flaw.

The TBT "train box" includes two "tail tracks", allows trains to get off the platform, either for overnight parking or for non-passenger operations like restocking and cleaning, without using up space in the tunnel.

What this means in theory is a train can arrive at an arrival platform, unload passengers (which is a very quick operation, since trains have far fewer passengers per door than airplanes), move to the tail platform to make room for the next train, get trach unloaded, seats needing deep cleaning looked after, food and beverage restocked, and then get move to the departure platform.

And the TBT tunnel access is designed with three tracks, which eliminates all sorts of potential bottlenecks:


This is a system that allows three different islands to be accessed with little interference, because only two islands receive incoming trains, and because each type of service has its own dedicated departure track ... so they can arrive in sync, dwell in station for different lengths of time, and leave on their own schedule.

In particular, it allows the HSR trains to be in the station for over 40 minutes, while only occupying the platforms for 30 minutes each, raising the capacity of four platforms from six trains per hour to eight trains per hour.

This also makes it easier to organize efficient movement of passengers, since passengers are either leaving or arriving at each HSR platform ... there isn't a the problem of departing passengers getting in the way of arriving passengers.

With this approach, 4 platform tracks support 8 trains per hour ... which is to say, adequate to the needs of the planned HSR system with enough spare capacity to allow for some growth.

The design flaw ... for supporting 8tph, that is ... may not jump out at you, but its in the picture, taken from the 2003 "locally preferred option" design for the TBT Environmental Impact Report. The right hand side is the tunnel from the present end of the rail line. The left hand is the turn to the tail tracks.

Now, the HSR platforms have to be designed for long trains ... once the capacity is filled with 8 car, 400 seat trains, they can be extended to 16-car, 800 seat trains, and then by moving to bi-level trains, 1400 seat trains. That means a 1,320 foot long platform. That means that the bottom two islands are for the HSR and the top island is for Caltrain. The bottom two platforms need to be stretched a bit, and the middle one straightened somehow ... but the TBT technical person said that that had been fixed up.

So, stepping through the pictured design:


What can be done to straighten up the mess? One approach is to swap the Caltrain platform from top to bottom ... and trim a substantial piece from the front (right hand side) of the bottom platform. In fact, trim enough from the front that the switch between the two platform tracks is after the single tunnel track has rounded the corner.

Note that this is just a rough sketch

The middle island can be straightened up a bit by extending the tail track directly from the middle platform, with switches connecting the top island, which gives more room before the platform track must bend to form the rail track.

This might not be enough for 1320 ft. of straight platform, but it'll be a lot closer ... and, after all, the CAHSRA is probably overstating how much straight platform they need, since the platform only needs to be straight for the passenger car portion. A little bit of bend for the driver cars at the front and rear of the train can be tolerated. If this can get 1200 ft. of straight platform with a 60 ft. curved part on either side, that certainly seems like it ought to be OK.


So, if both sides are wrong, who is going to admit it?

The question that puzzles me the most is not the technical one ... as tight a squeeze as it may be ... but the political one. The TBT authority have made public claims that present a picture of basically being ready to go, except for the fantastical demands of the CAHSR authority. The CAHSR authority has made fallen into the trap of making an ambit claim that they will have to strain to support ... but if that costs them the political argument, the fact that the TBT train box is an inadequate design is likely to be lost in the collapse.

The only player that strikes me as having the opportunity to say, "wait a minute, here's a fix that won't cost all that much to implement" is Caltrain. But ... under the solution above, they are giving up a 900 ft. platform, connected to the tail tracks, for what could end up being a 800 ft. platform, with only one connection to the tail track, and that connection only available when the closest HSR platform track is empty.

Anyway, that's the puzzle. But there's another possibility ... one which might be of more appeal to Caltrain ... so I am going to end this with an ellipses.