Sunday Train: Rescuing the Exurb from its Design 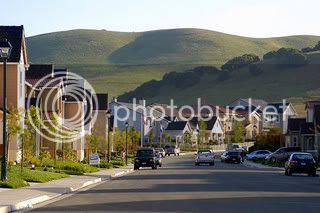 Back in April, Hope Yen was on the Huffington Post with Sprawling Suburbs Growth Falls To Historic Low Amid High Gas Prices

All across the U.S., residential exurbs that sprouted on the edge of metropolitan areas are seeing their growth fizzle, according to new 2011 census estimates released Thursday.
...
"The heyday of exurbs may well be behind us," Yale University economist Robert J. Shiller said. Shiller, co-creator of a Standard & Poor's housing index, is perhaps best known for identifying the risks of a U.S. housing bubble before it actually burst in 2006-2007. Examining the current market, he believes America is now at a turning point, shifting away from faraway suburbs to cities amid persistently high gasoline prices.
...
"Suburban housing prices may not recover in our lifetime," Shiller said, calling the development of suburbs since 1950 "unusual," enabled only by the rise of the automobile and the nation's highway system.

Voices on the Square