Crossposted from its home station at Voices on the Square 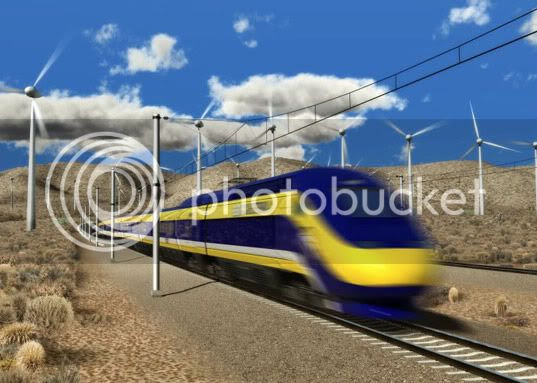 In a closely watched vote of the California state Senate, a bill to issue the first $5.8 billion in bonds for the construction of high speed rail lines passed 21-16. It needed all 21 votes to pass. Four Democrats voted no – including Allen Lowenthal, the Democratic candidate for Congress in CA-47, and Fran Pavley, the author of the state’s historic global warming law – but ultimately, just enough Democrats voted in favor of the bonds for them to pass. Joe Simitian and Mark DeSaulnier were the other Democrats who opposed the bill.

This does not end the battle for high speed rail. Between the bond issue and the federal money, that covers only about 1/5 of the total funding needed for the full project, which would connect Sacramento and San Diego and all points in between by high speed rail. But if this died today, you can be certain that nothing would ever get built. The federal government was prepared to take away the $3.2 billion in stimulus dollars earmarked for this stage of the project. And faith in the future of high speed rail in California – and indeed the nation – would have been sapped.

So ... what now? Join me at the home station or one of the stops along the way for a look to both the politics and transport policy ahead.

Crossposted from Voices on the Square to:

Hey! Thank you so much for sharing some information about this topic. This is a must-read blog. You have such an interesting and informative page. I'll be looking forward to be visiting your site again and for your other posts as well. Keep up the good work!
By 1550, narrow gauge railways with wooden rails were common in mines in Europe. By the 17th century, wooden wagonways were common in the United Kingdom for transporting coal from mines to canal wharfs for transshipment to boats. The world's oldest working railway, built in 1758, is the Middleton Railway in Leeds. In 1764, the first gravity railroad in the United States was built in Lewiston, New York. The first permanent tramway was the Leiper Railroad in 1810.
The options are endless and sure to include something for everyone. Check out our California Packages

Hey there! Keep it up! I will be looking forward to visit your page again and for your other posts as well. Thank you for sharing your thoughts about california by train. I'm glad to stop by your site and know more about california by train. This is a good read.
One issue initially debated was the crossing of the Diablo Range via either the Altamont Pass or the Pacheco Pass to link the Bay Area to the Central Valley. On November 15, 2007, CHSRA staff recommended that the High Speed Rail follow the Pacheco Pass route because it is more direct and serves both San Jose and San Francisco on the same route, while the Altamont route poses several major engineering obstacles, including crossing San Francisco Bay. Some cities along the Altamont route, such as Pleasanton and Fremont, opposed the Altamont route option, citing concerns over possible property taking and increase in traffic congestion. However, environmental groups, including the Sierra Club, have opposed the Pacheco route because the area is less developed and more environmentally sensitive than Altamont.
Where do I want to go? Check out our list of California locations and then see some of the great packages we’ve already put together. You can pick one city or multiple cities over several days.