It Need Not Be a Calamity Betwixt and Between, I find myself. I observe the validity of D00m.P0rn shrill warnings about the future ... when seen as possible outcomes rather than when seen as certainties. Yet I also see the potential for better outcomes.

And with respect to the strategy of sitting on the sidelines, weighing the likelihood of one versus the other ... I'm against it. Simply the decision to sit on the sidelines makes the calamity more likely as a result. So I am for getting into the fray and trying to make the calamity less likely and the hopeful outcome more likely.

As far as potential calamities, we do not have to look far for those.

We are on track to have a higher concentration of CO2 in the atmosphere than at any other time in the Holocene. We are engaged in this experiments with absolutely no serious evidence to suggest that it is known to be safe. Indeed, those benefiting in the short term from the reckless experiment will even try to reverse the sane burden of proof and place it on those who do not approve of undertaking the reckless experiment.

The argument being, in essence, that if you are driving through a thick fog, then as long as you don't see any cars coming, its OK to speed.

And of course, before the peril of climate chaos came to our attention, there was already the risk of ecosystem collapse hanging over our head, as more and more populations on the planet rely on an industrial technology that is quite clearly ecologically unsustainable and therefore certain to collapse sooner or later, unless we restructure our technological base to approach sustainability faster than we approach ecosystem collapse.

And then of course, even before the risk of ecosystem collapse was widely understood, the threat of nuclear holocaust.

Flood, Nuclear fire followed by Nuclear Winter, Famine and Plague ... and all three involved in or certainly leading to War ... surely rather than Four Horsemen of the Apocolypse, there is a whole Cavalry Unit.

Against that backdrop, it may seem provincial to worry about a mere collapse of a single national economy from first world to banana republic status, but that is the specific calamity that I am focusing on here. 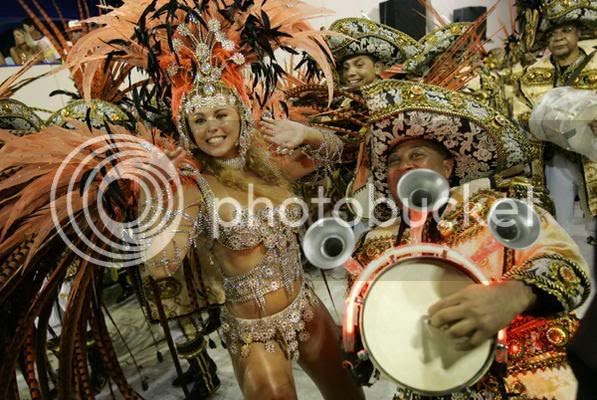 When I was growing up and became old enough to notice such things, Brazil was the code-word to be used for runaway inflation. While it was responsible for an impressive amount of industrialization during the 40's and 50's, Brazil's import-substitution policy eventually ran into a structural flaw. That was, as Brazil moved into more and more complex manufactures, the capital intensity of the new industries kept rising. Which meant more and more funds required to buy the capital equipment, produced overseas.

And yet, more and more of the "import substitution" involved creation of new income to demand new consumption, rather than swapping existing imports for domestic products. So the current account benefit of the policy, in terms of imports actually saved, tended to shrink, and the current account cost of the policy, in terms of structural dependency on imports of productive equipment, tended to rise.

Then the first Oil Price Shock hit, and its current accounts got into serious trouble. Conventional exports of tropical commodities had their prices hammered by the various oil price shock recessions, while Brazil was hit by an unexpected rise in the price of oil.

The need to recycle the oil revenues meant that for a while Brazil could close the gap with borrowing. But over time, debt service from borrowing made the gap in the current account even worse, and as the Brazilian economic position looked less rosy, Brazil started to find it harder to attract capital inflows to balance the current account deficit.

So the exchange rate started dropping.

Now, what happens when you are in an economy with a structural dependency on imports, and your exchange rate starts dropping? You need the imports ... all manner of industries will shut down without an ability to import parts and materials ... so you have to throw more of your domestic money at the foreign exchange (FX) markets, so your exchange rate falls, so you have to throw even more of your domestic money at FX markets, and etc.

Meanwhile the costs of production are going up, so there is cost-push inflation. If you are also trying to maintain the legitimacy of government by maintaining demand in the face of falling real income ... that is a recipe for hyperinflation.


That's Brazil ... what does that have to do with the US?

OK, so that's the Current United States Option Number 1. The US, after a 30 year diversion from the industrial development policies we pursued from the 1790's to the 1970's, is heading in that direction, should the price of crude oil return to its pre-Panic of 2008{1} levels. 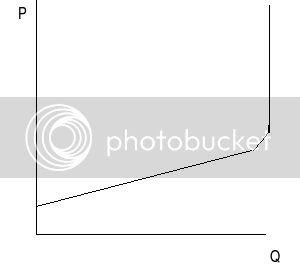 And if the global recover is strong enough, it will, of course. Supply of oil is like the figure to the right. A steep enough drop in demand will leave oil selling for the cost of production, and then push the price down further, as the oil that is more expensive to produce drops out of production. On the other hand, once we hit the amount of supply available in a given period of time, the price will just keep going up until potential buyers are squeezed out to match the amount of oil available.

Indeed, an international consensus emerged among the high income countries as to what to do when a country is faced with that kind of position. In order to ensure the ability of the country to meet its foreign obligations, it must through its economy into an extended period of depressed economic activity. Then collapsing incomes will mean fewer imports, and willingness to work at near starvation wages and attract foreign direct investment.

A bit more pleasant, of course, if you are propounding it in the air conditioned meeting rooms of a five star international hotel in the capital of the country that has to impose a depression on its economy as part of an "economic restructuring" ... than if you have to live through it as an ordinary citizen of that country.

So that's option 2. We work to ensure that the recession continues on as an extended depression. First, as the consumer of roughly a quarter of the world's crude oil, that in itself will have keep the price of crude oil down. And second, by depressing our incomes and depressing the domestic prices of our real resources, we reduce our imports across the board while making the US more attractive for capital inflows aiming to exploit our real resources for export.

There is the choice between the Devil and the Hard Place, or the Rocky Shore or the Stormy Strait.


But It Need Not Happen: Option Three

But we know what the holes in the US current accounts are. We don't make much of anything that other people want to buy except for armaments and, like a banana republic, natural resources. And for armaments, we are half the world demand, while for natural resources, we are a net importer when Energy resources are taken into account.

An economy like the US that cannot power itself without imports is in an even more exposed position than an economy like Brazil that cannot equip itself without imports. You can ration, defer or postpone investment in equipment for a period of time and still keep the economy ticking over. This is much harder with the energy required for residences and workplaces, for transport to work, for shipment of goods, and for harvest of food and other natural resources.

And then our ruling elites collectively decided to pretend that social division of national product is a more fundamental question than the ability to continue producing it, and we descended into the last thirty years of the wealthy focusing in grabbing a bigger share of the pie, while assuming that the baking of the pie would magically take care of itself.

Pursuing the narrower technical and broader technological capabilities to meet that goal also means producing the equipment to harvest that energy. And since, unlike armaments, the biocapacity of the rest of the world is many times the biocapacity of the US alone, that will be an ability to produce things that many countries in the rest of the world will wish to buy.

Of all the high income nations of the world, we have done the most to allow our real productive capacity to stagnate and then decline. That means that, yes, pursuing the SEA Strategy ... the Sustainable Energy Abundance Strategy ... will involve quite a bit of investment in productive capacity to produce the equipment to produce the equipment to harvest the energy.

But ... if government does intervene in this way, we can steadily cut into our structural current account deficit. Indeed, in terms of our external accounts, the SEA Strategy is self-funding, since the extra imports from the extra demand will be compensated for by reducing our dependence on energy imports.

BruceMcF, In response to your post on ecosystem collapse, sustainability and global crisis :


The link between Mind and Social / Environmental-Issues.

The fast-paced, consumerist lifestyle of Industrial Society is causing exponential rise in psychological problems besides destroying the environment. All issues are interlinked. Our Minds cannot be peaceful when attention-spans are down to nanoseconds, microseconds and milliseconds. Our Minds cannot be peaceful if we destroy Nature [Animals, Trees, Air, Water and Land].

Chief Seattle of the Indian Tribe had warned the destroyers of ecosystems way back in 1854 :


To read the complete article please follow any of these links.

Fair enough, I'll leave that up.