On the Sprawl Disease 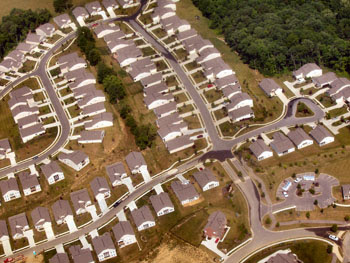 How far should we push the effort to roll back sprawl development?

On the one hand, there is the standard reasoning of marginalist economics, as expressed by a commentator to a Gas Tax post by Yglesias:

Rob and Noah - at the point that the negative effects of carbon emissions are fully internalized, I don’t think we need to fight sprawl anymore. There is some optimal, non-zero level of sprawl, and as long as people are paying the price for their consumption decisions, there’s no justification for using super-optimal taxation to force them into dense residential areas. Another way to put this is, once you’ve removed the negative environmental effects, what’s the matter with sprawl?

However, the costs of sprawl development are far from exhausted if we just consider the CO2 emissions impacts. There are external costs in the vast acreage that must be devoted to parking ... the four to seven parking places that each car requires, even though it only every occupies one of them at a time. There is the time drained from people's lives by every increasing Vehicle Miles Traveled (VMT) ... and increasing VMT at the same time increases the contribution of each car to traffic congestion. There is the costs imposed on those who can not drive in designing not just our residential system but our work, shopping, education and leisure activities in a way that are biased in favor of cars and against access by common carriers.

And then there is the cost in blood, from victims of our callous tolerance for traffic fatalities to the thousands of American servicemen and women and hundreds of thousands of Iraqis kills in our vain effort to establish a police station state on top of the world's last great stockpiles of inexpensive to produce crude oil.

Now, where would we end up if we reflected all of those costs to the participants in sprawl development?

Once you’ve removed the negative environmental effects and have also reflected the rest of free rider costs from sprawl development back to participants in the sprawl development system … then there is nothing wrong with sprawl, as there would be very little left.

That is not to say that everyone would live in a densely populated large urban area … but that the “sprawl” option would drop out of the mix of settlement choices.

After all, bear in mind that sprawl development is not just “low population density”. It is a whole system of subsidies and regulatory restrictions to create segregated activity zones and the subsidized point to point mixed public/private transport system required to access those dis-integrated locations for distinct activities.

So people living at exurban population densities that have 80%+ of their local trips to a common suburban village center and 80%+ of their ex-local travel occurring via dedicated transport corridors accessed at a common suburban village center … would not be living in "sprawl". It would be something else, much more similar to living in the close hinterland to a small town before the rise of sprawl development.


In this city with no footpath theres a building with no people
There is crime and gun decisions
Theres a street of heat and hawkers, theres a house of hope drifters
Theres a gang that shoots then listens
Theres a place that knows no poverty, a town without pollution
Theres a soul with good intentions
There are canyons full of movie stars, churches made of metal
There are mountains made of muscle
We have leaders who are anxious, we have captains not courageous
Captains tumbling into madness
But theres a main who makes no enemies, a body never breathless
No ambition ever hopeless

In these locked and shackled neighbourhoods, bridge and tunnel diplomats
See the golden ghettos creeper
Crazy flags from history, songs for the white house gangsters
Guns for hellgate railway sleepers
But theres a main who makes no enemies, a body never breathless
No ambition ever hopeless
So how stands the city on this winters night?
The city on the hill or so they said
The snow is falling down around the armoury
The citys closing in around my head

Up on bedlam bridge...