Dear Barack, I want a Cycleway for Christmas


A little bit optimistic and a little bit pessimistic at one and the same time, I'd say ... but, they really do have a very solid point.

It only took a couple of weeks to work out a more efficient route, and I only used the Bike and Hike trail a couple of times since then. As you can see, it mostly runs from one small town to a small park near to but not at a University town.

Now, the ride I took to work was quite insane in terms of a reasonable commute for anyone who actually has a life to live other than just trying to keep student loans from exploding ... but if the trail went all the way to Kent, I could definitely see using it sometimes during Spring, Summer and Fall ... for example, riding to the University library, or even past the college town to the sprawl big box retail zone just over the Summit County line.

But look at that "system". One solid green line, extended by a dotted line that means paint along the side of the road and some street signs warning cars to beware of bikes (kind of like the "beware of deer" signs, I guess), and two small dashes of green.

Now, when looking at the whole system, all those bits and pieces do tie together into a single system. Indeed, it was not this complete when I was using it ... the link up between the screened crushed limestone trail and the painted lines on the side of the road "trail" was opened up on the Saturday before election day.


The Fictitious Cycleways of Ohio

When we pull back and look at Northeast Ohio ... this is by no means unusual. A network has been laid out ... and slowly, more than a decade past the original completion dates in many cases, bits and pieces are being filled in.

And pull back still further, and the same is true statewide ...

Now, for the "planned extension", it may take some time to sort out transport easements ... but for many of the gaps, its a matter of chasing up finance between a drib from this township and a drab from that park system.

IOW, a lot of these bikeways are ready to break ground very quickly.


Is that Transport or Recreation?

Now, it should be kept in mind that most of these are "bike trails" rather than transport-oriented cycleways. And they do not clear them of snow ... instead, they suggest that the trails be used for cross country skying when snow is on the ground. Mind, that did not prevent me from taking the trail on by bike one winter evening as I took the long way home (Docudharma).

Not the bridge over the upper Cuyahoga river, which was no real trouble ... the bridge over the Interstate. The approach to the bridge from the south was too steep to accelerate, the morning traffic mostly consisting of people getting off the state route to take a short cut to work was dicy, and the shoulder was narrow with lots of road debris swept onto it by the traffic.

And while there were multiple routes to get from one place to another on county and township "highways" (and a warm thank you to city dwellers for subsidizing those country roads) ... if there is an Interstate Highway in the way, those routes are restricted to the overpasses and underpasses. Which, by their very nature, tend to channel car and truck traffic.

Every public street and road other than a limited access expressway is a potential bike route, at least in the state of Ohio. Cities and Villages can permit riding on the sidewalk, but they cannot restrict riding on the public right of way. And I relied heavily on that freedom in stitching together a route to work.

However, the Interstate Highway system violates that freedom when it breaks up public rights of way without providing bike and pedestrian friendly overpasses and underpasses.

So there's another entry for the New Energy Economy component of the stimulus package. Whether they are dedicated cycleways to the right of the shoulder, raised enough to prevent road debris from being swept onto the path, or separate cyclist overpasses ... and I'll note here that those fancy French single-arch "twisted cable" suspension designs sure do look purty ... 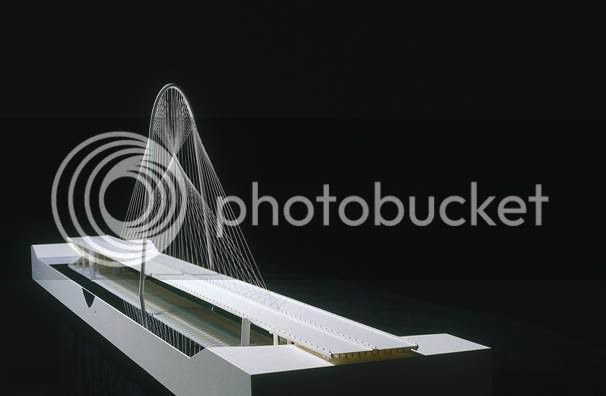 ... and, indeed, its OK if the bridge connects two side roads that used to be a single road before the Interstate, somewhere in the vicinity of the road overpass. And, by the same token, where its easier to go under than to go over, a cycle subway with pedestrian sidewalks is also acceptable.


The Road Not Taken ... because of all those Fracking Trucks

Now, every once in a while, I had to stop by the bank after work. My ride was so insanely long for my limited cycling capabilities that I could not get to the bank in my home town after the end of the first shift (7:00am to 3:30pm ... 8 hours plus an unpaid half hour lunch break). So I'd have to take the State Route down to the closest bank branch, and then take the State Route that led from that town to the town where I'm living.

And I know that there are some even more insane bike riders who will just ride on the State Route and dare the trucks to run over them, but I just do not have the heart for that kind of conflict. Ride on a 35mph or 45mph country rode, and most drivers will react like you kinda belong there ... or at the very least like they are not 100% sure that you don't belong there. Ride on a busy one-lane-each-way State Route, and far more drivers are 100% sure that you do not have any right on that road (even if, by Ohio State Law, I do).

So for those rides, I declared caution the wisest form of valor, and rode on the shoulders.

But between the Bank and the boundary line of my home township, riding the shoulder was an exercise in imaginative trail riding.

So this is the third item I'll list here: ridable shoulders.

A quick Google of rideable shoulders is illuminating on this score ... cyclist rely on shoulder riding in a wide variety of contexts for precisely the situation I describe here.


So, well, its not just my imagination. A formal specification of what constitutes a rideable shoulder and money that can be used for establishing a rideable shoulder (including a pay-back provision if future road widening takes it away again) is something that would be of benefit to today's cyclists ... which means, of course, it will encourage more to ride.


How in the Hell can such tiny programs be included in the Bail-Out?

OK, so how to fund all this?

Getting Congress to vote on putting in that cycle and pedestrian bridge (or subway) over Interstate 80, quite possibly 5 to 10 years in advance of any local effort to stitch it into a laid-out on-road "share cycleway" system ... that's a bit unlikely.

On the other hand, if a local area had a choice of allowed spending projects, and decided to spend it on that ... well, then, the local area just may have a better idea of local conditions and where local development is likely to head than a Congressional committee.

So this is my idea: an accounts based system, with a "use it or lose it" provision to ensure that it works as effective stimulus spending.

Who gets an account? Every incorporated city, suburb and village and every unincorporated township or parish in the nation. The money goes out on an equal per capita basis, and a set of allowed projects are set up, the account holders submit their projects for verification that they meet the guidelines, and the money is disbursed.

This is supposed to be a two-year stimulus bill, so put two year's worth of money in each account, and establish a deadline for when account holders have to submit their projects during each year of the funding. Multiple projects can be submitted, and more than a single year's funding can be included in a submission. If any account holder does not have a submission in, their allocated funds are shifted to front-load the spending from account holders who have put in their projects, and their account for the second year is adjusted. If an account holder does not have have sufficient approved projects to use their allocation by the submission deadline for the second year, their funds are re-allocated to the areas that have projects in.

Obviously we don't want blood on our hands here, so the projects would not include funding for painting "bike lanes" on the sides of city streets. If a street is wide enough to allow a bike lane, it is safer for the cyclist to allocate all of that width to the rightmost lane, and post "share the road", and "caution for bikes merging left" signs at appropriate intervals.

And full respect has to be given to walking as well ... if a local suburban area is establishing a walkable "town center", that should be supported as well.


How much money? I'd say $10/person/year, or $6b total for the personal transport allocation.

Note that this same account system can be used for Regional Transport and Transit projects as well ... once the account is set up, it can have sub-accounts for a variety of programs. If petroleum conserving and petroleum independent transit and transport is included in the system, that would be an additional allocation, which could soak up a substantially larger quantity.