I've been following with interest the discussion of California to Las Vegas HSR at the California HSR blog.

To catch up with the state of play, before the passage of CA-Prop 1A, Senator Majority Leader Harry Reid (D-Confusion), who hails from Nevada, supports a maglev line from Las Vegas to Anaheim, and there was an article in the Las Vegas Sun indicating that Gov. Schwarzenegger and Gov. Gibbons had talked up the maglev:

Near the bottom of a news release detailing Gov. Jim Gibbons’ meeting last month with President-elect Barack Obama was the announcement that Gibbons and California Gov. Arnold Schwarzenegger had agreed to move ahead with the high-speed train project.

“Arnold and I agreed to jointly work together on the project,” said Gibbons, who is planning to travel to Sacramento to talk with Schwarzenegger about it.

Also before the passage of CA-Prop 1A was the DesertXpress proposal to build a private Rapid Passenger Rail system to capture part of the stream of cars heading up the I-15 from LA to Las Vegas. The proposed system starts at Victorville.

Of course it would be great if DesertXpress could be extended to downtown Los Angeles, Anaheim and Ontario, and someday it might. But for this initial project, it is critical for the station to serve the Southern California market and be financeable without public tax dollars.

Victorville makes a lot of sense because it is the first major population center northeast of the Cajon Pass through the San Bernardino mountain range separating the High Desert from the Los Angeles basin. Victorville is within only a 30- to 45-minute drive for roughly 5 million people who live in the Inland Empire, Antelope Valley, and the eastern portions of Los Angeles County, and only a one to two hour's drive for most of the rest of the Southland's 21 million residents—many of whom routinely drive at least an hour to and from work each weekday.

However, now that CA-Prop 1A has passed, the wise heads at the California HSR blog (CAHSR blog)) have pointed to an alternate solution that would provide downtown LA and Anaheim service, as well as downtown San Francisco, San Jose, Fresno, and Sacramento service. First, note the proximity of the propsed Victorville station to the closest station on the main trunk CAHSR route between LA and the Bay.

Now, as it turns out, there is an existing rail alignment between Mojave and Barstow, and Rafeal at the California HSR blog has already sketched out a map of a line from the proposed CAHSR system to Las Vegas (google maps), from which I have clipped: 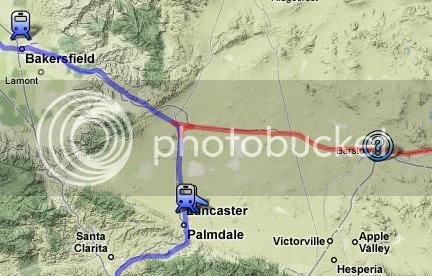 In the post about this issue on the CAHSR blog, there was much discussion of the relative priority of this route. However, the DesertXpress proposal is set forward as a private venture ... they obviously need approval to construct the line in the I-15 alignment, but (unless the financial crisis has changed their view on this) what they require is permission, not funding.

Which points out one possible path ahead. Give the DesertXpress the go-ahead, dependent on electrified rail (but see The STRACNET electrification series for a proposal that reduces the commercial obstacles to electric rail infrastructure on private rail lines), maintaining compatibility with the CAHSR system, permitting a junction at Barlow for the CA-HSR, and guaranteeing fair access to their line by common carriers operating between Las Vegas and the CAHSR system. They can proceed on their planned basis, and when the main trunk of the CA-HSR has been completed, a connecting line between Mojave and Barstow is all that is required to open up the Victorville-Las Vegas line to Anaheim, Las Angeles, Bakersfield, Fresno, San Jose, San Francisco, and when the extension is completed, Sacramento.

Of course, a maglev system is an expensive show-piece project with impressive top speed. However, for anyone living in a transit oriented urban or suburban village, who would have to catch local transit to the HSR station, then the HSR to the maglev transfer station, then the maglev to Vegas ... getting into the Las Vegas bound HSR service at the closest HSR station is a more appealing prospect.

And by the same token, for those who are taking a short hop flight to Vegas, pressing the capacity of the airport in Las Vegas, the ability to go to drive to a closer HSR station and catch a direct HSR service should be more appealing to many than an HSR service to a maglev transfer station. After all, once you have settled in with your laptop or the movie on your portable DVD player, an uninterrupted trip with no uncertainties about a transfer is a more pleasant way to travel ...

... lost in dreaming, while blazing through the desert ...