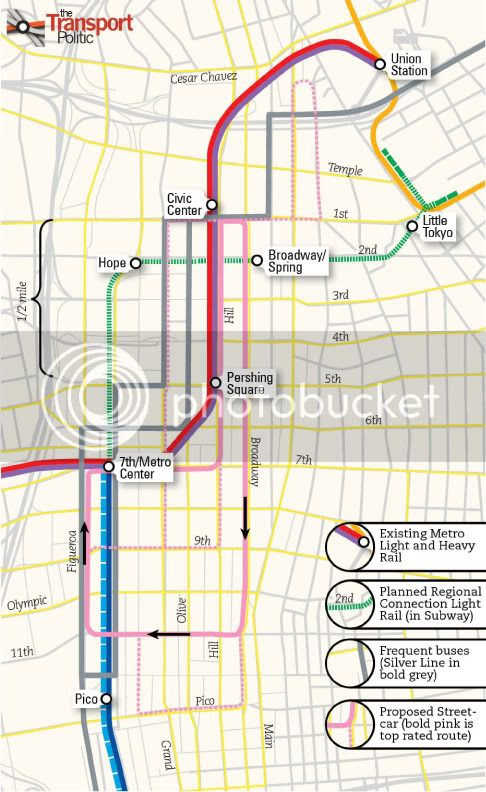 Nearly a month ago, Yonah Freemark had a post at The Transport Politic entitled, Los Angeles’ Streetcar Plans: Too Duplicative of Existing Services?. He wrote:

Los Angeles has big hopes for its downtown, and, like most of the country’s major cities, it has seen significant population growth in the inner core over the past ten years. Now, to extend this renaissance, the city — also like many others — is planning a [http://www.metro.net/projects/historic-streetcar-service/ streetcar line] that would traverse the district from north to south. Last month, it applied for $37.5 million in U.S. Department of Transportation TIGER grant dollars, which it hopes to supplement with local and private funds to complete an initial route of between 3 and 5 one-way track miles at a cost of between $106 and $138 million.

Despite the fact that planning for the L.A. streetcar goes back for more than a decade thanks to the work of a public-private local advocacy group, the city will have plenty of competition in its effort to win federal funds. Requests for the third round of TIGER funding outnumbered actual funding available by 27 to 1. With so many projects up for consideration, anything funded by Washington ought to be valuable. But L.A.’s project could benefit from significant improvement.

And then ... well, join me at one of the community blogs below:
ProgressiveBlue
The Stars Hollow Gazette
HillbillyReport.org
Daily Kos
Posted by BruceMcF at 8:04 PM

Looks like CHSR is dead in the water with the peer review commission under Will Kempton clearly arguing for an end to funding.

All the issues I mentioned long ago have come together to scuttle high speed rail in California once again - inflated speeds and ridership, politicized routing, urban redesign ideology - - plus the lack of an overall national rail program.

I doubt a single mile of test track will even be built. Meanwhile, a single daily train - the Coast Starlight - trundles between LA and the SF Bay Area taking about 12 hours.

Similarly, HSR projects in Wisconsin, Ohio, and Florida have been nixed - only Illinois is moving forward, but really simply improving speed on the CHI-STL line - nowhere near HSR speeds.

As I feared in our discussions three years ago, high-speed rail is likely to be trashed for at least another decade if not a generation.
State and regional initiatives have never gotten off the ground in 40 years. This is simply the most recent chapter of the same novel.

The Democratic caucus in the California Assembly has re-affirmed their commitment to the project, the Governor has stepped in and smashed heads together to allow the more sensible Blended Operation approach, as in HSR systems in France, Germany, Italy, etc., to replace 30% of the budget for unnecessary exclusive, dedicated HSR corridor at 90mph to 125mph through urban areas with more efficient sharing of infrastructure with local express passenger services ...
... the project is not certain until they get the first corridor funded and break ground, but the prospects are 50:50 or better for funding approval later this spring and for California to break ground next year.