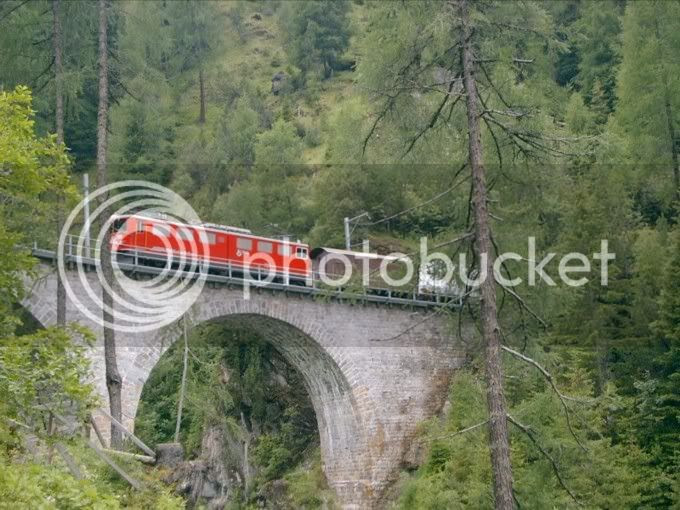 I noted near the beginning of the Appalachian Hub series about the special advantages offered by rail electrification for this project.

Now that I have sketched out a process by which a national Steel Interstate network of corridors can, in fact, be built in this coming decade, this is probably a good time to come back and take a look at the challenges that are faced when putting the Steel Interstates through hilly and mountainous terrain.

Of course, if rail electrification was a particular benefit in mountainous terrain, one would expect to see it in places like, say, Switzerland. 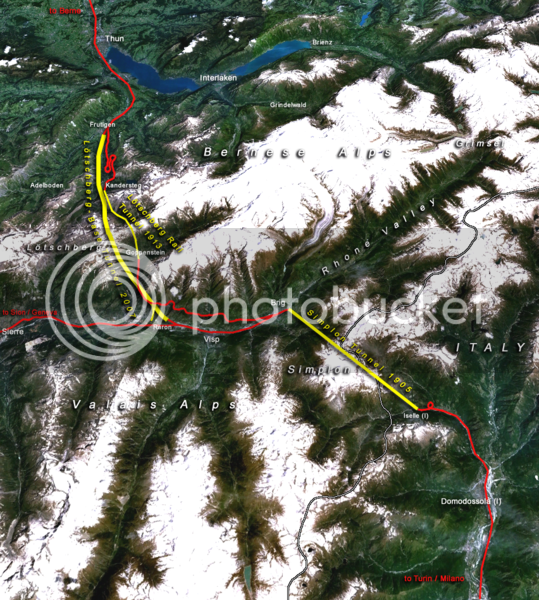 When tuning in to news from Switzerland, the big story are so-called "base tunnels". These are tunnels that cut through "the base of a mountain". The Lotschberg Base Tunnel, featured in World's Most Spectacular Tunnels, cuts through the mountain a 1,312 feet lower than the tunnel that it replaces ... that is about a quarter of a mile lower.

Just as the original investments in Japan and France in capital-intensive HSR passenger lines, what is driving this investment in base tunnels is the capacity limits of the present rail routes. As AlpTransit's description (pdf) of the Gothard Base Tunnel Project puts it:

Construction of base tunnels under the Gotthard and Ceneri creates an ultramodern flat rail link whose highest point at 550 metres above sea level is no higher than the city of Berne. This is much lower than the highest point of the existing route through the mountains at 1150 metres. Gradients will be no steeper than where the railway crosses the Jura mountains through the Hauenstein tunnel (Basel – Olten) or the Bözberg tunnel (Basel – Brugg). The route through Switzerland becomes flatter and 40 km shorter. Italy and Germany come much closer together.

Freight trains travelling on the flat route can be longer and pull up to twice today's weight – 4000 tonnes instead of 2000 tonnes. They will be up to twice as fast, too: the fastest freight trains will have a top speed of 160 km/h. Trains like this cannot be used on existing Alpine routes because of the steep gradients and tight curves. When the flat route is complete, it will be possible to transport an equal volume of freight with fewer locomotives and personnel, and less energy.

Just as with the Japanese and French investment in Passenger HSR, it is important to put this investment in context. This is not a result of the failures of the existing Swiss electric freight rail system - it is a result of its success. That is, the growth in interstate freight transport is pushing up against the capacity limits of the Swiss system because the Swiss rail system was effective in capturing a substantial share of freight. 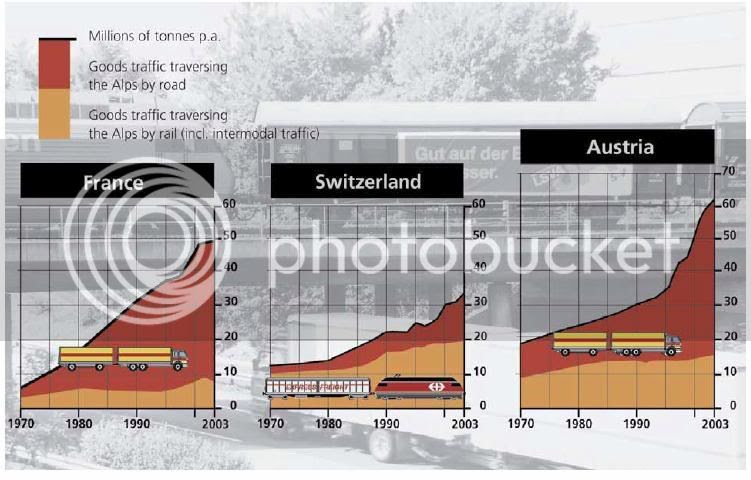 This figure from sheet 5 of the Gothard Tunnel pdf makes the point in no uncertain terms. The original Swiss electric freight system has carried a majority of the Trans-alpine freight that passes through Switzerland, while in France and Austria, the majority of freight has been passing by road.

And when digging further into the description of the Base Tunnel makes it clear the benefit that the Swiss have obtained from electric rail.


Why Electrification in Mountain Rail Corridors?

Bear in mind that a normal maximum gradient in many US mainline rail corridors is 1%, or "10 per thousand", when considering the following description of the route being replaced:

The ramps of the present-day railways through the Gotthard and Ceneri have gradients of up to 26 per thousand. The flatness and straightness of the base route – maximum gradient 12.5 per thousand overground and 8.0 per thousand in the base tunnels – allow productive deployment of long, heavy trains through elimination of time-consuming shunting operations. Today, a heavy freight train travelling north-south over the Gotthard and Ceneri mountain routes requires a pushing locomotive because of the steep gradients. The goal of freight trains hauling more than 2000 tonnes travelling through Switzerland without stopping at Erstfeld or Bellinzona, and without midtrain or pushing locomotives, can only be accomplished when both the Gotthard and Ceneri base tunnels are completed.

As the Wikipedia machine notes, the secret to this success in the mountains lies in the higher power-weight ratio of electric locomotives:

The high power of electric locomotives gives them the ability to pull freight at higher speed over gradients, in mixed traffic conditions this increases capacity when the time between trains can be decreased. The higher power of electric locomotives and a electrification can also be a cheaper alternative to a new and less steep railway if trains weights are to be increased on a system.

Putting the Advantages to Work

Of course, one way to cope with mountainous terrain is to avoid it. In the proposed Steel Interstate system, line one, the Liberty Line from New England to California, runs along the Shenandoah River Valley, the original "highway to the west", mostly avoiding the type of terrain that the Swiss would consider to be Mountains. To the west, it runs through the lower land of southern New Mexico and Arizona, a similarly easy route through the western cordillera, and then runs up the Central Valley to bring most of California within its catchment.

The roughest terrain that this corridor needs to tackle is the alignment west and north of Chattanooga, where the existing STRACNET corridor does a sweeping S-curve to avoid the rougher terrain where the Interstate has simply been blasted through. This is a key point where the Line Development Bank will have to carefully analyze the alternative alignments, and could well opt for taking the Rapid Freight Rail corridor out of the conventional freight rail corridor, where the Rapid Freight Rail path gains time by operating at a steeper gradient than the conventional rail corridor. That is, operating at 60mph over half the distance may well be a faster path than operating at 100mph along the heavy freight alignment.

Unlike the Swiss freight system, the electrified heavy freight paths will not have to contend with constantly shuttling aside to make way for passenger trains, since the passenger trains will be on the Rapid Rail Paths, whether those are provided by dividing up the time of day that different trains run on a track, by providing separated track in the same right of way, or by providing a Rapid Freight bypass on its own Right of Way.

Once the Chattanooga to Nashville, alignment is determined, that also solves the only stretch of rough terrain that the Heartland Alignment faces, while the Gulf and Atlantic Line only ever runs to, but never through, rough terrain.

In other words, other than the Chattanooga/Nashville alignment, all of the challenging terrain has been focused on the National Line:

Indeed, it has been suggested to me that this is a line that should not exist at all. So in a couple of weeks, in King of the Mountain Part II, I'll take up the focus on the need for a genuinely national network, and the flexibility that the institution of the Line Development Bank gives us in pursuing a genuinely national network, focusing on the proposed Steel Interstate system both with and without the National Line.


The Headliners: Midnight Oil / King of the Mountain

Walking through the high dry grass,
pushing my way through slow
Yellow belly black snake,
sleeping on a red rock
Waiting for the stranger to go
Sugar train stops at the crossing,
cane cockies cursing below
Bad storm coming, better run
to the top of the mountain
Mountain in the shadow of light,
rain in the valley below