Who do the UK and Spain intend to Invade?

Burning the Midnight Oil for the Arc of the Sun,
posted from My Left Wing 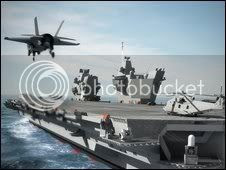 Earlier this month, the BBC covered a growing debate in the UK on its defense stance, and in particular on its £10b ($16.5b at current FX rates) program to build two aircraft carriers displacing about 70,000 tons ... over three times the size of their current "cruiser" carriers, and larger than anything but the ~100,000 ton US behemoths.

The BBC said, with its typical understatement:

But it is not just that. Perhaps more than any weapons except nuclear ones, aircraft carriers tend to be seen as a statement of how a country views its military role in the world. And therein lies a lot of the controversy which seems to surround them.

Crossposted to Docudharma, to be cross-posted from MLW to Agent Orange circa 5pm EDT, 2pm PDT

Last year, while following up a subthread in the European Tribune commentary to How will the EU manage the pending collapse of the US Empire? ... and thanks to the contribution from JakeS ... I came across some peculiarities in the national navies of EU countries.

I was looking at the "EU navy" idea, and following up on vessels in the fleets of EU nations that would qualify as "Sea Control Ships", in the modern parlance. From the Wikipedia:

A Sea Control Ship (SCS) is a type of small aircraft carrier designed and conceptualized by the United States Navy under Chief of Naval Operations Elmo Zumwalt in the 1970s.[1] The SCS was designed due to severe cuts in Navy spending, requiring a cheap, flexible platform that could provide convoy escorts and deliver limited air power to the field without tying up an enormous aircraft carrier during times of conflict.

Given that for defensive purposes, Europe would be an enormous aircraft carrier, in my view the Sea Control Ship encapsulates precisely what it is that the EU might want an aircraft carrier to do ... protect shipping from pirates plaguing a sea lane, or from aggressive militants in one or another cause in small boats with high explosive on board, provide helicopter support for a humanitarian crisis, anti-submarine defense, and et cetera.

I was thinking of two in an EU Navy, the HMS Illustrious and HMS Ark Royal, slated for decommissioning in the Teens. However, I was ignoring the Spanish and Italian Navies (see note 1) ... with the Príncipe de Asturias and the Giuseppe Garibaldi (and the larger Cavour to come).

Except ... joining the Príncipe de Asturias in the Spanish Navy will be the Juan Carlos I amphibious assault vessel, and replacing the UK Invincible-class light carriers will be the Queen Elizabeth class heavy carriers. 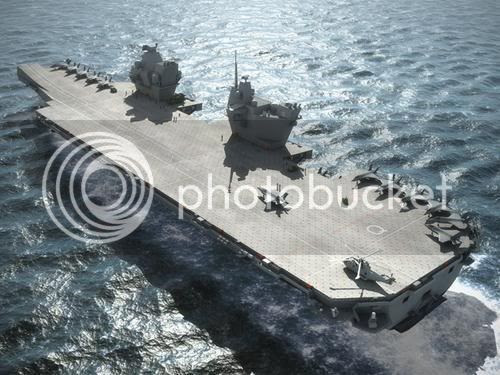 
What is the Queen Elizabeth for?

What are these ships for? Well, according to Navy Matters:

The Invincible-class of carriers were designed for Cold War anti-submarine warfare operations, with an airgroup of mainly ASW helicopters plus a limited air defence capability provided by a small number of embarked Sea Harriers. This essentially defensive role is no longer appropriate and the emphasis with the Future Aircraft Carrier (CVF) is now on increased offensive air power and an ability to operate a wider range of aircraft in a variety of roles.

The CVF mission statement has been officially defined: "The CVF is to be a joint defence asset with the primary purpose of providing the UK with an expeditionary offensive air capability that has the flexibility to operate the largest possible range of aircraft in the widest possible range of roles."

It is expected that CVF will be tasked:

They are for fighting wars, or for "promoting peace" by (ahem), posing the credible threat of fighting a war. In other words, what is the "problem" with a "Sea Control Ship"? They are not what you want when you want to invade a country or fight somebody else's navy.

Of course, this is all described in a very generic way, but it also had the support of the Pentagon Foreign Policy. From the Wikipedia:

Giving evidence to the House of Commons Defence Committee, the First Sea Lord Admiral Sir Alan West explained that interoperability with the United States Navy was a factor in deciding of the size of the carriers as the firepower of the carrier's airwing:

[for a] deep strike package, we have done ...quite detailed calculations and we have come out with the figure of 36 joint strike fighters ...that is the thing that has made us arrive at that size of deck and that size of ship, to enable that to happen. I have talked with the CNO (Chief of Naval Operations) in America. He is very keen for us to get these because he sees us slotting in with his carrier groups. He really wants us to have these, but he wants us to have the same sort of clout as one of their carriers.

What is the Juan Carlos I for?

And what is the role of the LHD's of the Wasp class? From GlobalSecurity.org:

These ships conduct prompt, sustained combat operations at sea as the centerpiece of the Navy's amphibious strategy of "Forward ... From the Sea." They provide the means to deliver, command and support all elements of a Marine Landing Force in an assault by air and amphibious craft. In carrying out their mission, the ships have the option of utilizing various combinations of helicopters, Harrier II (AV-8B) Jump Jets and air cushion landing craft (LCAC), as well as conventional landing craft and assault vehicles, illustrating the LHD's flexibility. In addition to embarked landing craft, the ships carry four LCPLs and two utility boats. Off the landing beach, the ships can ballast more than 15,000 tons of seawater for trimming during landing craft launch and recovery operations in the well deck. 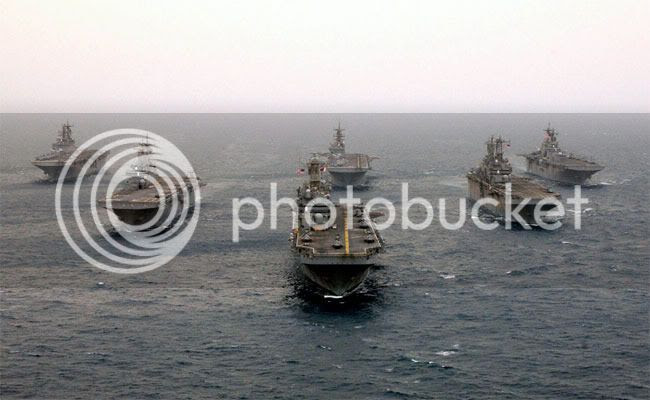 I don't see any record of a U.S. Chief of Naval Operations saying they would like the Spanish Fleet to have an amphibious assault vessel as its flagship, so that it can slot in to a group of Wasp-class USN vessels ... but I really don't think its necessary. After all, it's just the one.

There's no point spending the extra for all that amphibious assault capability for a vessel that is going to be restricted to a Sea Control Ship role ... a second ship of the Príncipe de Asturias class would not only be cheaper to build and equip, but its also cheaper to maintain two ships of the same class than two ships of two different classes.


So, who you gonna invade, again?

Which brings me around again to the question I posed at the European Tribune last year ... who is the EU planning to invade?

The US, that I can understand. After all, we have an overseas base network of 700+ bases. Maintaining that many points of presence in so many countries overseas requires interference with local affairs. Interfering with local affairs in that many countries ensures that large numbers of people and large number of groups of people are going to be pissed off at the US. And we have had thirty years to cope with the decline of our crude oil energy production by developing renewable sustainable energy sources, but instead we have just amped up our oil addiction ... and when an addict fights to hold onto a weapon, a natural presumption is they are holding it in case they need it to feed their addiction.

So, except of course for the central insansity of the base network itself and the refusal to fit our consumption to our biocapacity, it makes perfect sense for the US to pursue massive carriers capable of supporting offshore air strikes deep into a large continent, and amphibious assault groups for going in and coercing nations into being willing participants in the base networks.

I'm missing something here? Or perhaps these ships don't really make sense after all?

Labels: European Union, Military-Industrial Complex, The Arc of the Sun