Weekend Bike Blogging: Bike Boxes I Can Believe In 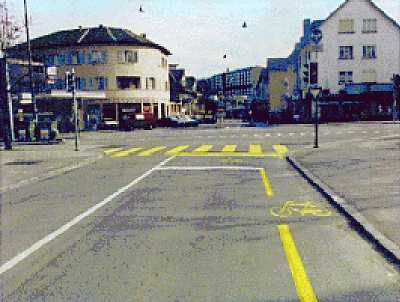 In the store, or at the airport, a "bike box" is a box that is supposed to have a bike inside of it.

However, at an intersection, a "bike box" is when you make a space at an intersection ahead of the "traffic stop here" line. They are often combined, as in the picture, with a "protected by paint and optimism" bike lane. In some cases for traffic lights that are tripped by stopped vehicle detectors, as in the YouTube clip below, they include a more sensitive stopped bike detectors in the bike box, so that the sensitivity of the regular vehicle detector does not have to be adjusted.

Looking at the overall concept, as [http://bikexprt.com/bikepol/facil/stopline.htm John Allen does in A LOOK INTO THE "BIKE BOX"], this is yet another case of, probably subconscious "if only we could kill off these cyclists we wouldn't have to worry about them" thinking by traffic planners.

One thing the bike box does is amplify the encouragement of the regular "protected by paint", aka "kill the cyclist", bike lane to pass stopped motor vehicles on their right side. This is a practice that you can get away with day after day, but sooner or later you are going to end up trying to go straight when a car is trying to turn. And given the fact that the car is risking its pain job and you are risking an extended stay in the hospital, that is a monumentally stupid habit to pick up. Its bad enough that "protected by paint" bike lanes encourage this habit - the "protected by paint with a prize at the end" is even worse.

The second thing the bike box does is allow the cyclist to get to the left hand side of the lane "in the safety of the bike box" - which is to say, "protected" by the paint of the vehicle stop line. Picking up the Bike Box Youtube in the third example, we can see how effectively the main vehicle stop line protects the bike box from incursion by motorists - as in, not at all.

At 1:00 into this clip is a safe passing on the right - because the car is turning left. But in a single share traffic lane, if the left turning car is in the left part of the lane, the cyclist can pass just as safely without requiring a bike lane at all.

At 1:15 into this clip, and then again at 1:40, we see the key to designing Bike Boxes as if we want cyclists to live.

In the first case (1:15), a cyclists could have used the bike lane to try to sneak around the car to get into the bike box to get in front to prepare for their left turn. But then, what if the signal changes "mid-sneak"? Either they try to get the car a left hook - and the cyclist of course loses whether they are receiving or delivering a right or left hook - or they have to wait until traffic is clear to merge left. Safer, and worst-case-quicker, to simply merge left behind the car and wait to turn left.

Indeed, lots of cyclists sneaking around the right to get in front of cars for left turns, and sometimes getting caught, could well encourage drivers to encroach on the bike box to prevent it.

So while the bike box is a death trap, an aware cyclist can easily avoid the trap. For the expert cyclist, who uses it optionally and when appropriate, it offers the convenience of being able to trip the traffic signal. On the other hand, an inexperienced or confused cyclist is more likely to be killed.

Surely a bike box that is less likely to kill the inexpert cyclist can be designed?

The idea of using the bike box to enter from the right and then get positioned for a left hand turn is a clear kill-the-cyclist idea. Consider the example from John Allen, pictured to the right. The bike box in the top right, which is already occupied, is not likely to have a car seeing a new green and driving through a cyclist lining up to turn left. The bike box in the bottom left, though, which is empty, is more inviting for a cyclist to go around right to get left - and sooner or later, there will be a car that is looking up to see green and then down to see the cyclist too late.

So that is the first thing to get rid of. That does not mean the bike box should not exist on the left hand side. It is safe for a cyclist who has already merged left to occupy that slot waiting for the light. Its just encouraging death or injury to try to sneak in "over the top" of traffic waiting on the light. 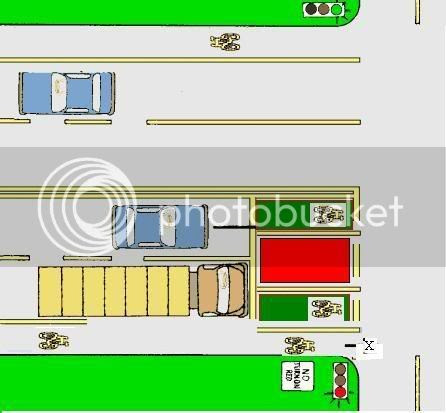 This means, of course, that there should be two boxes - with the space between barred to cyclists.

If there is a "protected by paint" bike lane, the solid line should not extend to the box. Instead, left turning cycle traffic should be warned to merge left safely for a left turn, and then straight through traffic warned to merge into the traffic lane to pass through the intersection. Before the start of the bike box, a cycle lane should be marked "right turn only" - and only of there is a cycle lane to turn directly into - because the only time it is even plausibly safe to pass cars on the right is if turning right inside of the traffic lane.

Indeed, in a "turn right on red with caution" state like here in Ohio, there is no need for a traffic indicator in that case - a right turn only bike lane turning into the a bike lane is a cyclist that can look out for crossing cyclists heading to the bike lane. Its only the through and left turn cyclist who needs the signal tripped.

So, that's my idea of a better bike box. It does not encourage habits likely to get novice cyclists killed before they have a chance to become experienced cyclists. It retains the advantage of having a dedicated cycle trip detector. It supports left turning cyclists positioning themselves so through motor traffic can pass them safely to their right. And it allows marking between the left and through bike boxes that indicates far more clearly to the driver not to encroach on the box.

REM: Stand Thing about Direction
: : :Wonder Why You Haven't Before