You're From Ohio, You Idiot, Don't Screw With Our Train

"Tell me how spending $8 billion,"

"in this bill to have a high-speed rail line between Los Angeles and Las Vegas is going to help the construction worker in my district."

Now, lets look at the Federally Designated Corridors -- and you have to gave a designated corridor to get any of the $8b. 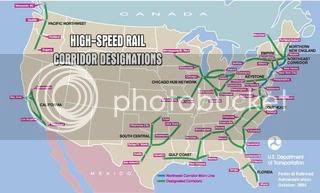 Yup, no corridor to Vegas. Oh, and what's that we see ... two, count 'em TWO corridors through Ohio ... Cleveland to Chicago and Cleveland / Columbus / Dayton / Cincinnati.

Indeed, the Triple-C route ... which at present has no interurban rail service, because back in 1960, Columbus was a little cow town of 300,000, and its growth to a metro area of 1m+ happened during Amtrak's long struggle to avoid the ax ... goes right past Boehner's District.

And look more closely, at the full fledged Ohio Hub: 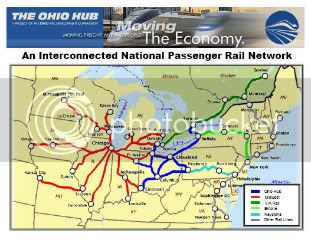 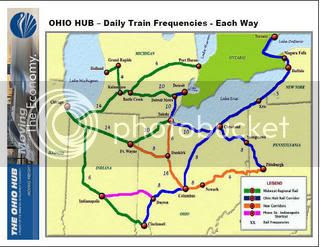 ... if we can roll out the system, Boehner's constituents will be able to catch a train in outer northern Cincinnati or Dayton and get to Philadelphia, or New York, or DC. Now, y'all who live in big metro areas might think that's a long trip ... but the reality for someone living in Boehner's district heading to one of those destinations is normally a much longer drive to an airport, then a puddle jumper to a hub, then a flight to the destination.

And getting "shovel ready" projects on the corridor is straightforward. Since the Ohio Hub is designed along existing rail rights of way, there are few alignment headaches to hammer out. And since it is targeted to being a 110mph Rapid Rail system, one of the essential projects required will be upgrading crossings to the quad gates, speed-sensitive train detectors, and improved signaling to allow crossing at 110mph.

That is, a large number of small upgrade projects, spread across the state. Including projects just east of Boehner's own district, therefore certain to be employing some of Boehner's own constituents.

Look, Boehner -- can I call you John? No? How about Clueless Dick, would that be alright? -- you are trying to undermine work for your own constituents, to get a substantial down payment on a transport system that will, one day, be highly valued by your constituents.

When they do the redistricting, I hope they take your "safe" Republican district and do to you what you SOB's did to Franklin County Democrats after the 2000 Census. I just want to see you defending your fight against jobs and economic opportunity in Southwestern Ohio in a swing district.

Now that would be Change that I would Really Truly Believe In!