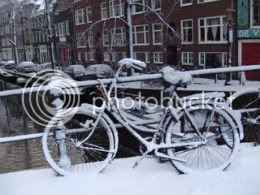 It is now well known around the place where I work that I not only, oddly enough, bike to work, but that I do not have a car at all. And so, one of the things that brings a smile to my face when I'm at work is the worried queries how I'll get to work when winter sets in.

I smile because last December I was biking 14 miles up to the warehouse in snow, sometimes feeling like counting my toes when I arrived to make sure they were still there. Given that, a bit under three miles to work this winter is far from daunting. But it is far from the imagination of the small town / exurban Buckeye, who view bikes primarily as fair weather recreational kinds of things.

Now, having gone through it before does not mean that I laugh, LAUGH!, in the face of the Ohio Winter, but rather that I know enough to cope with it.

The first thing is layering. And layering without cotton as the inside or outside layer, because cotton loves water, and water loves to become chilly in winter. From head to toe:

One of the first things I learned is completely obvious, but still it took experience for it to sink in. Snow is frozen rain. So when it is snowing, one piece of gear is the same as when it is raining ... a rain cape.

Of course, there are higher tech solutions out there, and if you are a Gore-Tex kind of person, I am not going to try to argue you out of your Gore-Tex Rain Parka as your outer layer. After all, while a rain cape largely solves the air circulation problem by creating a tent within which you ride ... it also creates a tent within which you ride, which can mean more wind resistance. I cope with that by leaving earlier and using a lower gear ... but if you have that wonderful (and expensive) Gore-Tex rain parka and it works for you, then by all means.

If you are going to be riding with a rain cape, rather than a rain suit, then you need fenders. I use the kind without the stays, originally developed to protect mountain bike riders from mud splattering. You will also need a place to put the tail light (even being a fair weather transport cyclist means having a red light, so I'll take that for granted. That is not a problem for me, however, since my tail light is permanently attached to my rear rack, that is not a problem. 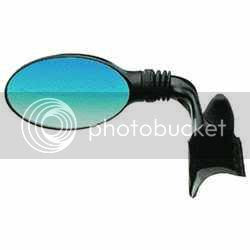 Even those who are used to turning around and looking for traffic will find that once you get bundled up, its handy to have a rear view mirror with a good field of view to keep a watch on traffic conditions behind you.

Just like rain gear, a mirror is a matter where tastes will vary. Some will swear by the mirrors that attach to the helmet or glasses, others to mirrors that attach to the handlebars. I personally like the kind shown, partly because the more stuff jutting out from the left hand side of the back, the more cars are likely to respect the bike when passing, in deference to their own car's paint job. 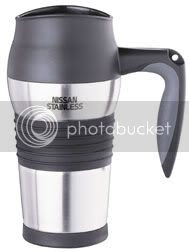 And finally, there is the obligatory hot drink cup. I like the Nissan Stainless, which fits in a bottle cage, twists watertight so it can be tossed into the pannier, and holds heat well. My bike had a second set of points for cage screws on the main tube, so I got a second water bottle cage and put the water bottle in that one.